Last Updated 09-20-22: Over-hauled guide and improved visibility. Eliminated the “aDPS and Burn Guide” by consolidating all information here instead. Eliminated Composite Winds due to high-consumption of mana, and included Summer Sunpyre.

Druids have some of the best burst DPS in current content. Don’t be surprised to see one make top 10 DPS on raid events. This should be viewed as an advanced guide, and which is largely geared towards raid druids.

There isn’t a one-size-fits-all approach to spell setups. If you’re forced to keep up a cure spell, then you will need to make room for it. Different group missions and raid events also require different spells sets when you factor in a single-mob fight (ie: Shei) vs multiple waves of adds.

It’s strongly recommended that you dedicate 5 Hot Bars to your entire DPS setup (and easy access to any AA or Group healing in between). It will make it faster to simply click any spells and AAs without needing to think too much.

The AA Nukes wedged in between spells will be explained in their own chapter of this guide. 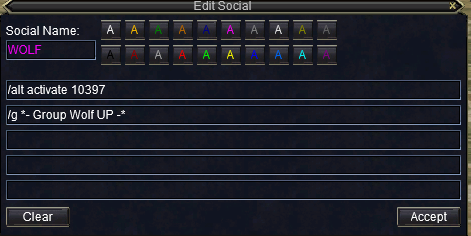 BURNS – this will instantly activate: 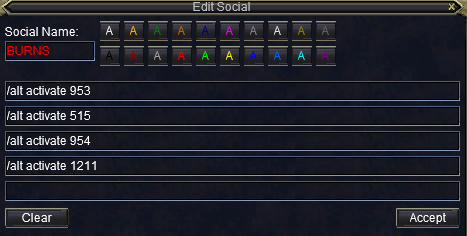 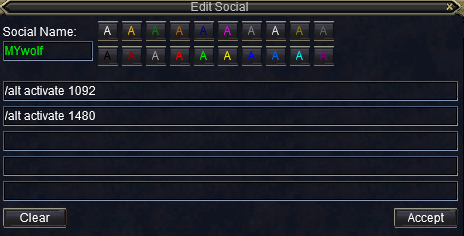 CHpls – this is useful if you have an enchanter in group. When burning, they should wait to apply Chromatic Haze until you land Nature’s Sweltering Wrath. 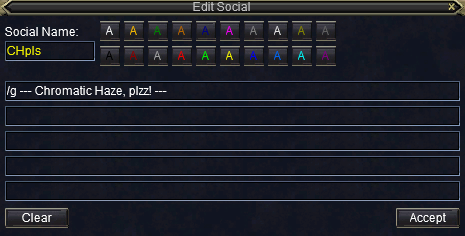 There should be some form of basic understanding as to what goes on behind some of the aDPS you receive, and how it affects your spells. Key class aDPS abilities can affect how you time your own burns – most importantly, those of an Enchanter.

Before aDPS discussion can begin, know your maximum passive crit chance rates obtained through various AA abilities. You can revisit the Personal DPS section of the: AA Ability Guide

This is a list of all abilities that other classes can bestow on you, as well as your own personal abilities. Not all these abilities may be used at the same time (and you’ll see why shortly).

aDPS and Personal Abilities During a Full Burn

The goal is to try and get as high to a 100% crit chance rate as you can. Several abilities you will commonly see activated during a full burn on raids are:

Now let’s see what happens when we factor your passive crit chance rate in with these abilities.

You may be grouped with a Bard on raids in which case you’ll see yourself way over the capped amounts as a result – and that is fine. Keep in mind that many abilities provide other benefits such as increased crit strength or other types of damage modifiers. However, there are certain abilities that you definitely don’t want to waste during such periods – ie: Spire of Nature.

Spire of Nature and Self Wolf typically get paired together to maintain a high constant flow of crit chance rate for DDs at least – especially during non full burn times. Unfortunately, Druids do not have any abilities beyond Destructive Vortex which affect DoT crit chance rates.

While you’re stuck with just the passive crit chance rate for DoTs, it is still not bad considering you have quite a few nukes to sustain in between DoTing.

aDPS that you provide your group comes in two forms:

Unlike burn abilities with short durations (2 min or less) and long refresh times, Group Wolf should be used each time off cooldown. It’s not worth holding off more than a minute on it.

If we are to assume that a raid event takes your raid team 20 minutes to complete, and that the first round of burns are diligently being used at or near the start:

This lends to the reasoning of why Group Wolf should always be used off cooldown. In theory, it should be back up no matter what for a second round of burns with ITC.

Burns Are Planned Around Improved Twincast

This is important for you to know in terms of aDPS you receive, and what personal abilities you happen to have up (such as Destructive Vortex). If an event looks like it will be dead two minutes before ITC will be back up, your Enchanter will probably not wait for it and just run their IoG anyway. This means you should run any abilities you happen to have up with their IoG. You might even have Twincast (spell) up to make up for not having ITC available.

Once you enter the realm of Druid DPSing, mana management becomes extremely crucial. How you manage your mana will depend on how long your raid team typically finishes events.

Always make sure you have a rod with three full charges before an event starts. You should start clicking the first charge by the time you reach 80% mana. As soon as you finish using the third charge, ask a mage for a new rod.

You better summon “boo boo” every 5 minutes to get some mana back!

Bolstered Growth should also be used once around 80 percent mana, and then every 5 minutes as it’s available for re-use.

Ask a Cleric for Quiet Prayer

When I see myself at around 70 percent mana that’s when I start asking a cleric for “QP.” You can only get QP once every 5 minutes. It helps to see what clerics are around and create social keys in advance sending them tells for it.

Group and Self Wolf

If you ALWAYS have a Wolf up, you will have a 100% uptime of reduction in mana-cost for spells you cast as well as increased mana regen! These abilities should be alternated off cooldown with Group Wolf always being used first, then Self Wolf – rinse and repeat.

Gift of Mana procs should be reserved for spells that cost ridiculous amounts of mana (ie: Nature’s Sweltering Wrath). An Enchanter in group will periodically proc group GoMs for you as well. It pays to have a GINA trigger alerting you when a GoM is on you.

DoTs are typically applied first on a mob. They are applied in the following order:

2. Horde of the Duskwigs – magic-based and long-duration spell.

Chill of the Dusksage Tender

A situational cold-based spell that can be applied after your third DoT (Sunpyre). This spell requires the use of a GINA trigger to properly time. Second-highest mana-cost DoT

If you re-apply this DoT before the trigger DoT is applied, you are essentially wasting mana. It only works best on a boss mob of some sort that stays alive for several minutes. The goal is to re-apply this spell once Frost of the Duskage Tender is triggered.

Due to this spell’s high mana-cost, some druids may consider leaving it out altogether on long raid events. This will entirely depend on how comfortable you feel using it in such cases.

This is applied as the last DoT if a mob has Season’s Wrath debuff on it. In this situation, it’s really used more as just a filler DoT. If Season’s Wrath is on cooldown, then it should really be used as the first DoT (really as a debuff). Confusing – I know.

Don’t sweat this spell too much. The double-focus it received in the past from Season’s Wrath was patched by the devs. It’s not as powerful as it once was.

For maximum DPS (and depending how well your mana can handle it), you can apply DoTs on multiple mobs. It’s worth gauging how quickly such mobs are dying. One DoT tick is equivalent to 6 seconds. If a mob is dying in under 12 seconds, then some DoTs might be wasting mana.

Sustained DPS involves nuking while either DoTs are ticking away, or if mobs are dying too fast to even bother DoTing.

This is a scaled back version to use when you are busy DoTing multiple mobs. Spells like Bloody Roar won’t see much mileage in these cases (as it takes long to refresh).

As a quick synopsis, this is how AA nuke abilities work (at max ranks):

First, let’s discuss what a Global Cooldown (GDC) means. Upon finishing a spell cast, you’ll notice all your spell gems greyed out and unusable for 1.5 sec. This is everyone’s GCD.

All activated AA Abilities are exempt from the GCD. Since your AA nukes take 0.5 sec to cast, they are used (aka “weaved-in”) while castable spells are on GCD during burns for extra DPS.

This is why AA Nukes can be used as weave-in abilities during DoT burns and also during sustained nuke dps.

The main bulk (and burst damage) of your burn is DoT’ing. The rest will be sustaining DPS via nukes in between and re-applying any DoTs that expire along the way.

This should be coordinated with your enchanter. The enchanter should be debuffing during the time you are activating these abilities and debuffing mobs yourself. If burning at the start of an event, then you can activate at least the first three tasks below beforehand.

… and then go straight into your sustained nuke DPS rotation. You’ll continue re-applying any DoTs accordingly in between once they wear off for the duration of your burn.

This ability has to be activated before Improved Twincast is on you. Otherwise it will give you a blocked message. DC will twincast your Remote Sunbolt 18 times up for 10 min.

Breastplate items with a click effect are obtained either through Group Missions or Raids. Due to the fact that the click effect has a cast time, it’s prefered to click it before burning.

By the time you reach your sustained nuke DPS on a burn, this should be more than enough ample time to activate the increased nuke benefit.

The most important debuff to have on any mob you are about to burn on. At max ranks, it increases the damage of your fire and cold spells between 17 to 25% for 1 min. It is also the reason that Tenebrous Sunray takes lesser priority and used as the last DoT on a burn order.

Chromatic Haze is an enchanter ability that should land on you right after you apply Nature’s Sweltering Wrath on a target mob. This requires coordination with your enchanter. It is also the reason a “CH” Social key can be used asking for Chromatic Haze after you land NSW.

This enchanter ability will increase the spell damage you do off the tick/DoT portion of your NSW spell by 390% (before crit). Given the fact that your NSW spell has an initial DD component and then a DoT component, you want to time this ability to take advantage of your DoT Tick. The DD component will not do as much damage otherwise.

Your Twincast spell serves as your basis for lesser burns.

This is a level 85 spell obtainable from the Seeds of Destruction expansion. While all ranks grant you 18 secs to Twincast any damage spells, it pays to get a group of friends to unlock the necessary SoD raids and obtain Rank 3.

If you can’t find someone to unlock the raids, or you don’t have the progression done, you can still purchase Rank 2 at least off a player, as it’s a tradable spell.

Twincast yields you a greater advantage when used for DoTs, rather than DD spells. This is a similar model to how you full burn. You’ll have 18 seconds to quickly apply all DoTs first. If you’re carrying a full arsenal of DoTs in a spell set, then chances are you won’t even get a chance to touch nuke spells before Twincast wears off.

The best way to plan out when to use Twincast is by making sure your group is coordinating burns in advance. If you know you will be using full burns at the start of an event, then you should be using your lesser burns afterwards – or vice versa.

While this guide is not meant to discuss gear matters, it is impossible to neglect three important augs that will do wonders for your mana. These are all obtained from the CotF expansion.

As an example, Splinter of Potency can save approximately 500 mana per cast of NSW. That’s a large chunk of mana savings over having an aug slot filled with a flat mana+ aug.