Most top tier raid teams usually have their druids in caster groups – with the expectation to focus more on DPS, rely on splash healing from clerics and shaman, and only spot heal their group in between. However, the latter is is not the reality for other raid teams that may be short on healers. Nor will it be the reality for a group-geared, autogranted AA druid.

There are three main, adaptable approaches to druid healing:

Let’s examine spell-cast times and heal amounts for instant duration heals. For example, casting a 4 sec heal spell, when a group member is near death, won’t make much sense.

In the table below, all spells values are based on rankless spells. The reduced cast times are based on obtaining all available foci (including type 3 augs as well).

Upon examining the chart, some of your fast, instant heals are technically not all pure heals. This is why target’s target healing (Blessing of Ro and Remote Sunbolt) becomes preferable to mix in as you get more AAs and mana.

Survival of the Unrelenting

This is your fastest-casting, emergency group heal with conditions. It wasn’t included in the chart, since this is a conditional heal with a long refresh time.

There is also the AA version available as Wildtender’s Survival. This does not share the same timer and is instant-cast instead.

Lunarush is a standard group heal. It also procs Preserver’s Synergy, if you have max ranks. The issue is that Lunarush is also is your longest-casting heal. It’s good to top off several group members taking damage at the same time, but a single heal will take less time to cast if only one player is taking damage. It should only be used if multiple players are taking damage.

A delayed heal is NOT meant to be used as standalone heal – except in the case of an emoted player that needs to run away from you. This types of heal is only good for using as a buffer in between instant duration heals.

If you look closer at the reuse time, it will be back up before the heal fulminates on the targeted player. This means you can unintentionally overwrite it early on the same player and reset the 18 sec countdown for healing… not something you want to do.

These are AA abilities that should be frequently used, no matter what role of healing you do. Many of these have already been discussed in both the General and AA Guides.

Both Group and Self Wolf abilities increase the chance to crit heal, decrease spell mana cost and increase mana regeneration. There is no reason to not be alternating between these AAs once you have purchased max ranks of them.

Besides acting as a debuff, it’s a fast-casting, low-mana cost, target’s target heal. At max purchased ranked, it will cast the highest rank of Cinch of Ro you know. It casts it much faster than casting the actual spell.

An instant-cast, large emergency heal that will also apply a heal over time.

A druid’s only “splash heal” ability which will heal all nearby players surrounding your target. Being that this ability also has a 1 sec cast time, it can sometimes be used in places where Lunarush may not have enough time to cast and heal all group members and where both Survival spell and AA ability are on cooldown.

This is optimal for most main-healing new druids that only have auto-granted AAs and basic gear. However, this can also be used if tasked with healing a tank group on raids.

Keeping Up Buffs on Tanks

Most of the logic behind this spell setup is to make it easier to keep up skin and certain short-duration tank buffs, such as Frenzied Growth and Bulwark of the Reptile.

The line of healing twincast spells are found under under Direct Damage > Twincast.

Such spells do NOT heal by themselves. They must be cast on a targeted player to simply proc two healing twincasts on you (and which will be visible in your short-duration buff window). You will then have twenty seconds to consume both procs with instant duration heal spells.

Why a Level 84 Healing Twincast is Used

Sundew Blessing (lvl 84) – Damages your target’s target and grants you a twincast of the next two heals you cast.

The reason a low level healing twincast spells is used here is that the higher level ones use far more mana. The lowest level one still works the same by applying two healing twincast procs for you. This spell also has a slightly faster cast time of 0.8 sec. See the comparison below: 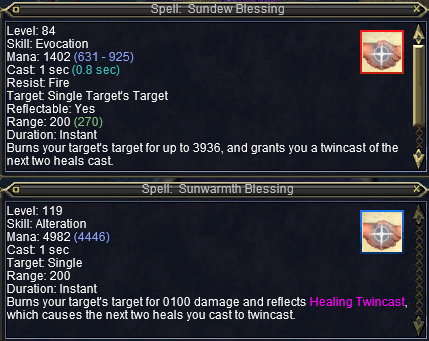 A spell rotation (along with a multi-bind key) can be used for this type of healing:

Keep in mind you will need to periodically use group heals or delayed heals in between.

You’ll pick a designated hotbar to put these spells in order and then create a multibind key for it. In my example below, I am using Hotbar 10 and Hot Buttons 2 through 5:

Next, you will open your Options window (ALT + O), navigate to the “Keys” tab, and select the Hot Bar being used, and designate a single key for Hot Buttons 2-5 as shown below: 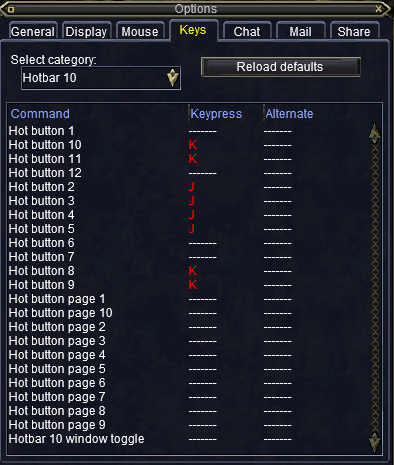 In this example, I am using my “J” key for the assigned heal rotation.

If you’re going to be using a pure healing setup, then it only makes sense for you to also be debuffing with Primal Frost. This debuff has a strong accuracy hit reduction component as well as a target’s target heal built into it.

Most main-healing druids will be adopt a more “balanced” style in group missions once done with a bulk of healing AAs. Instant duration heals will be powerful enough that you won’t need to rely on healing twincasts (unless assigned to a tank group on raid), and target’s target healing will become a staple of play.

Blessing of Ro and Remote Sunbolt will begin to see much more action. Therefor, use of any multi-ind heal key will diminish in use. You will be spending more time swapping between player and mob targets.

Once enough raid gear, foci and AAs are obtained, it will make sense to focus more on DPS. Quick or instant heals are the main theme being that you want to DPS as much as possible.

Tanks on mobs you damage will be receiving quite a bit of healing in the form of your target’s target healing (from remote nukes and Blessing of Ro).

Lunarush, being that it is the longest-cast time of all heal spells, is generally reserved for multiple party members taking extensive AE damage. Blessing of Tunare can also act as a fast-casting group and splash heal in between (and it has a 5 min refresh).

On raids, If there are adequate cleric and shaman splash heals, you will mostly be concerned with tossing quick, spot heals on group members that need extra help beyond that while saving Lunarush for prolonged exposure to AE damage where you have no choice but to use it.

The current druid alliance spell is called Arbor Tender’s Coalition. All priests have similar healing alliance spells that heal by different heal values. These are meant to be used in raid settings. Note that it is preferable for Shaman to use their alliance spells on tanks.

Places a buff on your target, lasting up to 4:42 min (with extended duration focus)

The healing rain on shaman alliance is stronger, and prefered for use on tanks.

Cast it on a Druid or Cleric

Since tanks on raids will benefit more from shaman alliance (and positioned oftentimes in places other than where ranged DPS classes are standing), you can simply cast your alliance on another druid (or even another cleric) instead.

To Use or Not to Use?

This really depends on your raid force and how adequate cleric/shaman are splash healing. It can help fill in some gaps even if the alliance doesn’t fulminate. Druids that are struggling to stay alive during heavy AE damage, can benefit using their alliances on each other.