Before you reach a character creation screen, you must choose a server. Which one will you choose? Server types and server populations can drastically impact your gameplay. The purpose of this guide is to help you make an informed decision.

After launching and logging into EverQuest, the first decision you are faced with is choosing a server. Before choosing a server, there are several main differences to consider between playing on a Live server vs a Progression (TLP) server.

If you are a Free to Play (F2P) account, then you will be limited to Live servers. F2P is good if you are looking to try out EQ with no commitment, see if you like a class, and/or explore old or original content. In fact, it’s highly encouraged for a first-time EQ player.

Regardless if you are an F2P or subscription account, an expansion purchase is required to gain access to current content. Current content may include new zones, new level cap increases, new AAs, and other expansion-specific features. EQ has typically unlocked free access to all but the last two expansions. This means that if you purchase an expansion now, you will automatically unlock all prior ones with it.

Keep in mind that F2P accounts will continue to have an AA cap as well as other restrictions in place regardless of expansion purchase.

For new players looking to make friends, server populations DO matter. Being stuck on a dead server will make playing the game a chore. Unfortunately, the server select screen does not show you to immediately see server population levels, but rather server statuses.

If you are looking for your next home on a Live server, you can always create a level 1 character somewhere and scope out the scene, but it may not be indicative of individual guild progressions and other characteristics. Newly-launched TLP servers are guaranteed to have ridiculously high player populations, so at least those servers are a given.

It’s good idea check out the official EQ Discord server. There are channels dedicated to every Live and TLP server, and you can chat directly with players.

Absolutely, not – if you know what you are getting yourself into. A non-social gamer that wants to just multibox will probably enjoy a low populated server. However, those seeking lively in-game chatter, or those with aspirations for raiding, should not seek out low population servers.

EverQuest, unlike other games (ie: WoW), does not have any type of global or cross-server play. You will need to either pay to transfer off a server (depending on availability) or start fresh elsewhere, if you are not happy on a server.

How to Check Real-Time Server Populations

In order to “see” a snapshot of current server population levels, you will have to access this feature via the Launchpad area. Be careful though – if you are checking server populations in real-time they may not be accurate during non primetime hours. If a server recently underwent maintenance (and was brought down), it may also show a low status as well.

Step 1: Open the Launchpad and login with your account 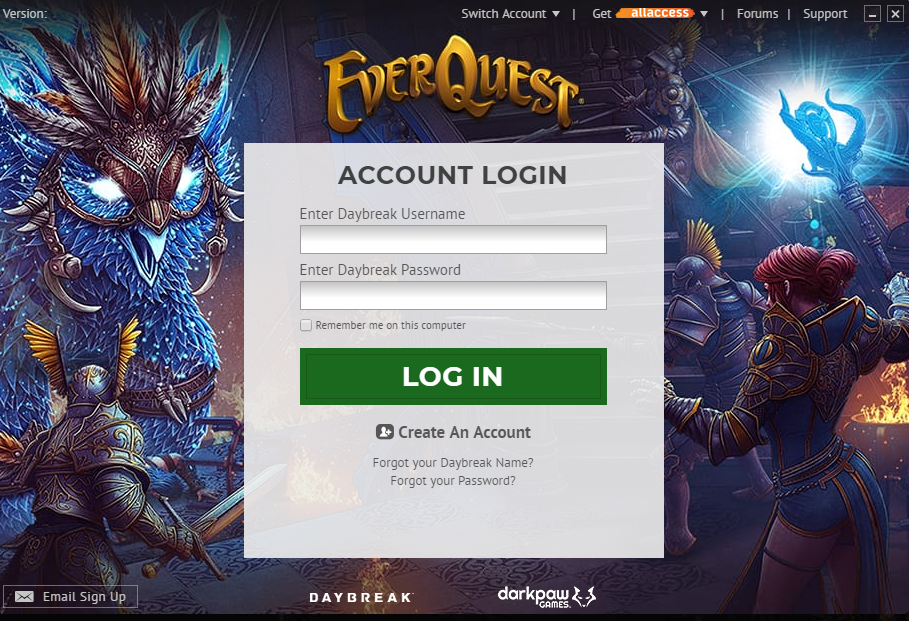 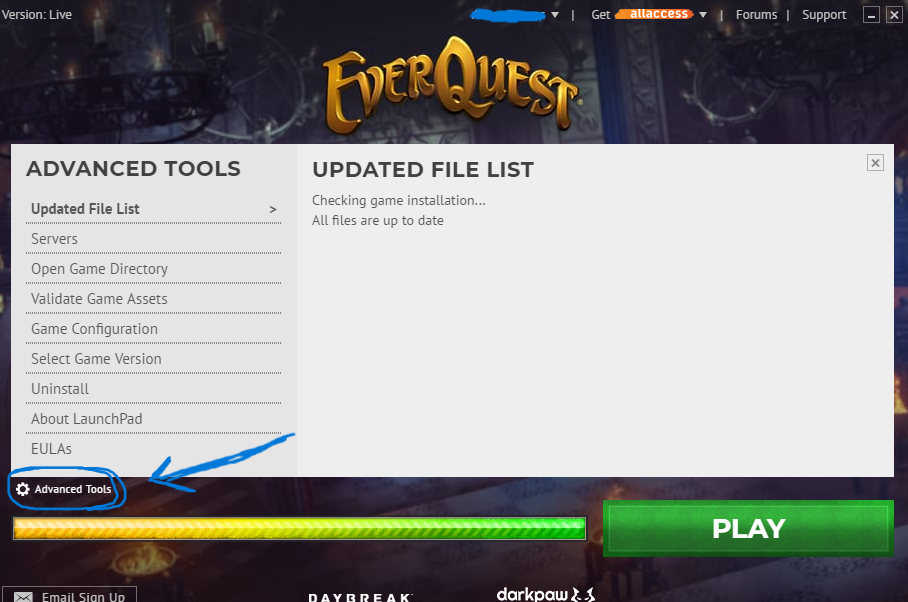 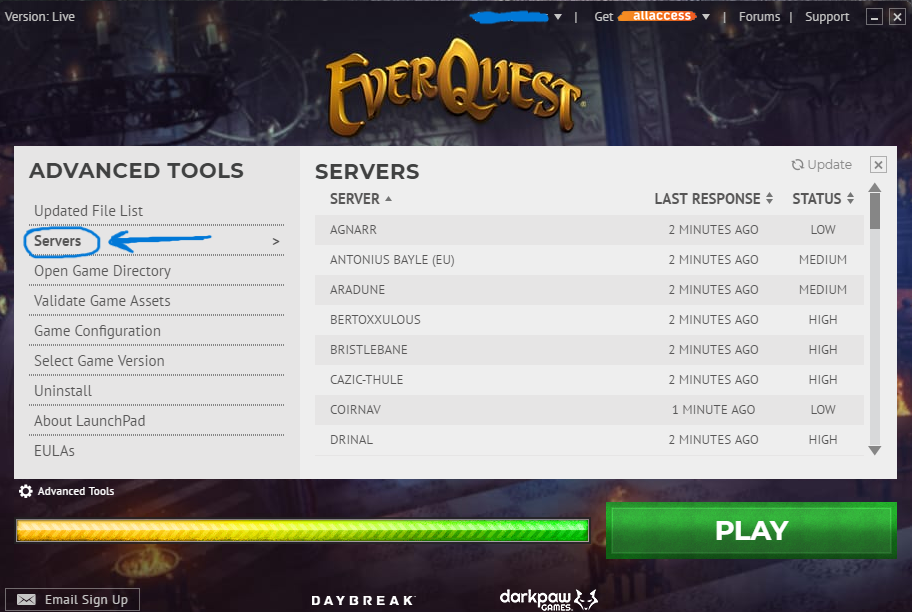 Most Live servers will employ a standard ruleset. The exceptions are the Firiona Vie and Zek servers which are discussed in the next two sections. Live servers have content from all expansions unlocked.

All Live servers have mixed player styles ranging from casual to raiders. For low-key, casual players that just want to socialize and group periodically, these servers are generally the best option. There is no shortage of activities with all expansions unlocked.

Players on a Live server can choose to either start at level 1 or use a paid Heroic Character token to boost an existing character to level 100.

Players from around the world can access EverQuest, but server latency can impact gameplay the further away a player is from a server. European players will typically experience higher latency on most EQ servers as a result. Antonius Bayle exists as a server option in an effort to provide low latency for the European player-base.

US players can still choose to play on the EU server. It is a medium to high population server which can afford players that work outside of “normal” US hours to play with others.

The Firiona Vie (FV) server is labeled as “Roleplaying Preferred.” This label can be deceiving, and it has special rulesets that are not obvious at the server select screen. The FV server is not only an RP server but also a Free Trade server. Here is what you need to know.

While some players and guilds may dabble in RP, most players choose this server for it’s free trade rules. There are RP restrictions though that you still need to be aware of:

There were many other restrictions on the server to force racial alignments. However, they have long-since been removed to make it easier for players to communicate with each other. While communication barriers are present at low levels, you can quickly learn other languages to communicate with the rest of server population in game.

Thanks to its enticing Free Trade rules, FV is considered to be one of the higher populated servers. Keep in mind that while characters are able to transfer to this server, they cannot transfer off of it. It’s basically a one-way deal. FV continues to gain an influx of both newly created characters and character transfers.

Is FV Right for You?

Due to the chat language barriers imposed on newly created characters, you will face a slightly higher level of difficulty starting off on the FV server as a new player. In general, you will find most players here have already played on other servers or have characters elsewhere.

An element of toxicity needs to be addressed here. Since FV is free trade, it tends to attract a high volume of “sellers” with self-serving interests. You will encounter fierce competition over lucrative drops, a wacky economy, and a lot of multiboxers. However, there are plenty of guilds that help out new players, if you can gloss past some of these negatives.

The only PVP server currently in existence is Zek. At one point in EQ’s history, there were up to 4 PVP servers which later merged into one.

Zek is one of the lowest populated servers. At most there are maybe 100 people online. There are also very few raiding guilds on this server. These factors (among others) continue to contribute towards it low population.

Is Zek Right for You?

The novelty of being on a PVP server will wear off quickly once you realize there are not many players around. For new players, Zek will be a difficult journey to start from scratch. You will lack social interaction and struggle for help at low levels on such a desolate server.

Unfortunately, support for EQ’s PVP community has greatly diminished. Broken systems, spell restrictions, and hacking are some of the turnoffs players will face here. Even still, there is a die-hard, niche community of PVPers. You can seek them out across the EQ boards if you are heavily interested in this server. Some players continue to take advantage of free character transfers to Zek at higher levels and pay to transfer off as they please.

Progression (TLP) servers occupy nearly half of server options for a good reason. They continue to lure in large volumes of new, returning and current players. Two TLP servers are typically launched per year, and this trend is expected to continue.

New TLP servers have typically been released in May – sometimes, even in November. You will have to keep up with the official EverQuest site for announcements on schedules. Playing on a TLP at launch-time is advantageous, and you get to be part of all the craze and excitement while teaming up with other players in newbie/starting zones.

Time-Locked Progression – Expansion content will automatically unlock according to a predetermined schedule. Some servers are designated as fast-progression while others are not. It is generally a good idea to research these servers beforehand and review their unlock schedules. Developers can adjust schedules at their discretion.

Voting Time-Locked Progression – Players on such servers get to vote on when the next expansion unlocks. Voting takes place in-game via a mailed poll.

Level-Locked Progression – Player levels are locked (capped) up to a certain level, and not mutually exclusive to expansion unlocks. For example, a server can cap you up to level 50, but have content up to level 60 unlocked. Developers can adjust schedules at their discretion.

Most TLP servers follow a traditional loot ruleset (ie: mix of tradable and non-tradeable items). However, there are a few servers using Randomized Loot. Mob loot tables are randomly mixed to offer players a chance at drops which otherwise would require them to be in specific zones. Expect loot rules to become more varied on future TLP server launches as a result.

Servers designated as “True Box” allow for only one character to be played on a computer. These are not really multibox-friendly servers. They are meant to encourage players to group together. However, players can box up to two characters (hence, the namesake) provided that they are running the accounts on separate computers.

TLPs have generally been good at keeping players busy and immersed in content for prolonged periods of time. Players have more grouping options than those on Live servers, as long as they can keep up with the pace of progression set on the server.

Over time, it is expected for guilds to be absorbed or merged into other guilds. Content will become progressively harder and require more dedicated gameplay. Strong guilds will be needed for raid progression. This is one of the main reasons why player populations tend to decrease about five expansions into a TLP’s progression.

Once a TLP approaches Live-era content, players will choose to either integrate into a Live server or start fresh on a new TLP. It’s not uncommon for guilds of players to bounce from one TLP to the next.